As Sergeant At Arms for Devils Pride MC, Tyler “Trick” Malone’s take no prisoners reputation make him one of the most feared and respected members of the club. Unbeknownst to the MC, Trick indulges his most dangerous secret, traveling out of state twice a year to trade his cut for the whip he expertly wields at a gay dungeon.

Trick’s well organized life takes a turn when he saves bar back, and terrified submissive, Chase Ward in a Georgia dungeon. With his protector and dungeon owner dead, Chase is no longer safe in the place he once called home. With the new dungeon owners circling like sharks, he desperately begs for sanctuary in the arms of his savior.

A year later, the MC is still none the wiser that Trick’s houseboy is anything more than a grateful servant. Chase knows, if the club finds out their secret, they will kill Trick—the man he’s come to rely on for everything from the food he eats to the pleasure he feels to the security he craves. Even when gratitude turns to love, Chase never expects reciprocation from his ruthless Master. After all, the only way for them to survive is if Trick remains the heartless bastard the MC knows.

Trick is positive he has it under control and having Chase around has definitely made his life easier. There doesn’t seem to be any harm in letting Chase take a part-time job at Velvet Ropes, especially after meeting privately with the owners. That is until a bomb explodes at the club, leaving Chase fighting for his life and forcing Trick to face his long hidden feelings.

Even if Chase survives, that bomb has done more than rock the foundation of the popular leather club. It’s blown Trick and Chase’s well-guarded secret out of hiding, putting their lifestyle and their lives at risk. Now there is only one thing Trick needs to do before the club gets them and that’s to get revenge on the person who dared to hurt his precious boy.

Authors Note: Tricking Chase is a direct spin-off of The Protector, which is book 3 in my Sizzling Miami series. Though I tried to provide enough details that it isn’t necessary to have read that book, I cannot really call this a standalone.

Carly: What is the best book you ever read and why is it your favourite?

Jessie: My favourite MM Book is One Real Thing by Anah Crow. It’s actually the first MM book I read and I fell in love with the characters, the story, the chemistry, the power dynamic…I was hooked. Of all the other genres, I would say it would be The Last Lecture by Randy Pausch. It’s the memoir of a dying man, a love letter to his family. I cried buckets from beginning to end.

Carly: If you could choose to have any type of super power what would it be and why?

Jessie: I’m not sure I’d want one. So much responsibility comes from having any kind of power, so many hands out to get something from you, and so many others wanting to tear you apart. Yeah, I’m good as a self-published author who writes in her nightgown.

Carly: Do you have any talents besides writing that are uniquely yours?

Jessie: I can fall asleep on the back of a Harley Davidson Dyna before it leaves the driveway and stay asleep without throwing the bike off center. The Dyna is not a touring bike, meaning it doesn’t have the big back rest, just a small little pad that sits at my lower back. I can also light a cigarette for my husband on the back of said Dyna doing 80 down the highway. Unfortunately, in the biker world, I’m not sure either talents are uniquely mine.

Carly: Do you have a guilty pleasure?

Jessie: Frozen Snicker’s bars. Barry Manilow’s Greatest Hits. Romancing the Stone and Jewel of the Nile with Kathleen Turner and Michael Douglas. Ever After with Drew Barrymore.

Carly: If you could take a vacation anywhere in the world where would you go?
Scotland. Castles, big men with accents, and kilts….sign me up!

The rush of words stopped him cold. No, no, no! They’d talked about this a hundred fucking times. Chase knew why he couldn’t feel that way. “Chase…”

“I don’t want to be safe if you’re not safe,” Chase repeated, each word punctuated by a harshly drawn breath.

“No, no!” Chase’s eyes nearly rolled back as the gel’s intensity hit its peak and he struggled to hold position. “If you force me to go, I’ll find a way to come back. You’re my Master. I won’t let them take that away from me.”

Though he’d played in the scene for several years, nothing had prepared him for Chase. For the responsibility of another person who would look to him for every decision and who craved his approval. Chase had taught him a lot about merging the lifestyle with a domestic partnership and, though Chase was emotional, he wasn’t clingy or suffocating about it. Not that it had been a cakewalk and those first few months had been a huge learning curve for them both, but Chase’s eager to please attitude and deference eased the way. In their time together Chase never once defied him, whether in play or in punishment, whether he was issuing an order or refusing a request. That Chase would choose to make his stand in this moment, bound to the bed, suffering through a punishment, made it all the more important.

“You would defy me?” It was almost impossible to believe.

“In this one thing, yes. Even if you said you didn’t want me anymore, I would do everything I could to make sure you were safe.”

The boy knew him too well. Knew that he wasn’t above lying or being hurtful if it served his purpose. The lesson in focus had paid off. Chase was sweating and writhing in pain, but his voice was even and his eyes were clear. “You do realize what will happen if anyone hurt you, don’t you, Chase?”

Instead of being put off, Chase nodded once and gave it back. “Exactly what will happen if anyone hurt you, Ty.”

The use of his given name was just playing dirty. Chase knew he had the freedom, but often stumbled over the two simple letters. Defiance and his given name...down and dirty. Was it any wonder that he adored this boy? He wouldn’t condone Chase’s defiance even if it spoke to the feelings he refused to allow either of them to acknowledge. He wouldn’t punish him for it either because he knew how precious that gift of loyalty was.

After spending years focused on one thing, and one thing only, finding his missing sister, Trick is caught completely off guard when the beautiful boy he's quietly watched from afar is thrust into his life. Their sexual chemistry quickly develops into a permanent relationship and Trick finds himself falling deeper and deeper under the spell that Chase unwittingly casts over him.

Intensely written with action, suspense, drama and romance, TRICKING CHASE is a power house of emotions. With the MC falling apart at the seams, Trick is forced to choose where his loyalty ultimately lies, and manages to surprise even himself by his unswerving determination to protect his boy at all costs. The chemistry between Chase and Trick is off the chart; from their most private moments of sensual pleasure to the smoking hot eroticism in their scenes, the dynamic that is Trick and Chase together is unforgettable. The strong characters that Jessie's writing is known for guarantees that TRICKING CHASE is one story you won't want to put down. 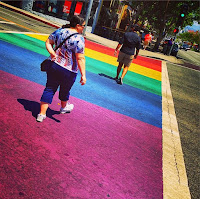 "Wearer of Many Hats" is a title that was given to Jessie by a former employer some twenty years ago. This dubious distinction, along with the job description "everything is her fault", came after she fixed an electrical problem—during her interview—that the office had been having for years. After that, if anything went wrong, her coworkers immediately declared it her fault so she'd have to fix it. This position of importance inspired the owner to convert a closet into an office, thereby providing her coworkers endless opportunities to refer to her as “the girl in the closet.”

Writing has been the elusive, life-long goal that seemed to be getting further away as the years went by. It took 30+ years to achieve, but she’s decided that timing is everything. The world wasn’t ready for m/m romance back then, and now that it is, the girl in the closet has finally found her writing home.

Jessie is a firm believer in marriage equality, love at first sight, power dynamics and happily ever after. She’s a lover of strong secondary characters and series filled with families, biological or chosen. All are themes you'll find throughout her books.

In addition to the rafflecopter, ecopies of Tricking Chase will be awarded to two randomly selected comments, so don't forget to include to leave a way for me to get in touch with you!
a Rafflecopter giveaway